Seeing Myself Again for the First Time 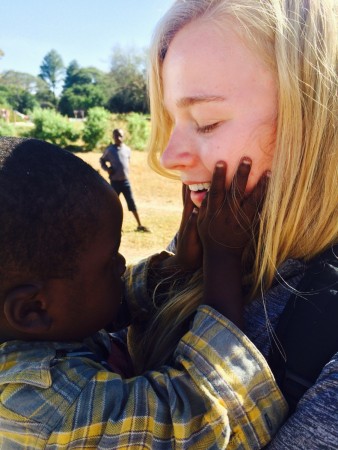 Before coming to Zambezi I knew I was going to have an experience unlike anything before. Without a true understanding of what this trip was going to entail, I was honestly surprised to feel like such an outsider in a place so many former Zags called home. I knew by coming to Africa I was going to be surrounded by people with a different color of skin than my own, but I did not realize how much the color of my skin would affect the way I was treated. Maybe that was because I had never been a situation where I was visibly different than everyone else, or maybe that is just the culture of Zambia. Either way, for the first time I am learning what it feels like to be a minority.

When we arrived in Zambezi, for the first time since leaving Seattle, I felt like I was in Africa. Being welcomed with singing and dancing by hundreds of children and adults put me on emotional overload. Kids grabbed at my hands as tears streamed down my face, their big brown eyes staring into mine. At first I felt so grateful for all these people and the gift they had already given me, but as time began to pass in our seemingly short stay in Zambezi I began to see this experience in a different light. I began to be challenged by Zambians views of us as superior, wealthy, and more knowledgeable then them.

Walking to the market is rarely a quiet journey or one that you take alone, I usually have a bag on my back and water bottle in hand. We are often accompanied by a group of a dozen or so kids at our wrists or following closely behind our backs. With each turn in the sandy road to the market, we here yells of, “Chindele (White Person) how are you?” and me trying to answer in as much lunda as I can muster up. Once I finally arrive to the market every single eyes turns towards me. People come out from their shops to shake my hand, kids ask to hold my bags, and cars slow down to greet me as they pass. I already feel famous in a town where I know no one.

This concept of fame came about in a different way a few days later. If you know me, you know how much I love babies, so you envision my excitement when I saw a little boy about 15 months old sitting outside the convent gate with a group of much older kids. I went over to him, bent down and said “hi.” He immediately started crying and you can imagine my disappointment. This boy had likely never seen a white person in his life and was clearly scared out of his mind at this “foreign creature.” As upset as I was that I did not get to hold this adorable baby I was also surprisingly comforted. I felt like for the first time since arriving in Zambezi I was not put on a pedestal because of the color of my skin, in fact, it was quiet the opposite.

Over the last almost three weeks I have discovered that Zambia is filled with people who have a passion for learning. They want to know everything they can and they allow us to teach them. Three days a week the health group teaches a first aid and basic health class. Our students vary in age, gender, and occupation. A few of our students are home health caregivers in Zambezi (basically nurses). They come to our class each day, arriving almost on time, and expect to learn from us. I am in no way qualified to teach them or any of the other people in our class. In fact, I am learning more from them then they could ever learn from me. Do they trust that I can teach them because I am a white American attending a University, or would they give the same respect to a Zambian who was 100 times more qualified than I am? This is a question that I expect has come across all of our minds at some point, “why me?” I don’t know if any amount of time in Zambezi could provide me with an answer to this question and I believe it is something I will continue to be challenged by, even when I return home.

I continued to question this concept of race during our visit to Falconer Home, an orphanage about an hour’s drive from Zambezi. I was immediately taken by 3-year-old Boaz, who ran around in short red overalls chasing the chickens and pigs, and had me and the other students cracking up. At one point I couldn’t help but scoop him up. I held him at my side as he proceeded to touch my pale white skin in fascination. Peter managed to snap a picture of this beautiful interaction and as I later looked at the photo I was overcome with emotion. In this picture I did not first see that he was black and I was white. What I saw was the incredible curiosity in his eyes and the sheer happiness of my smile. We may be from opposite sides of the world, speak different languages, and have different colors of skin, but in this moment I was able to recognize that we are both humans, in the same place at the same time, and no cultural, economical, or physical differences could change that.

Throughout my time in Zambezi I have been challenged to think more about skin color and how it can influence the way people are treated. In my experience the color of my skin has allowed me to be put on a pedestal, where many others around the world are not so lucky. I have discovered that I cannot help if I am known by the color of my skin, but it is my responsibility to make sure that is not the only thing I am remembered for.

I will never fully be able to understand the challenges people of color face within Gonzaga and American society today, but I hope I am able to use my experience in Zambezi to promote conversations and learning opportunities around the concept of race.

P.S. There have been no rat or snake sightings yet, but I did get to kill a chicken, more to come on that story later.

10 Responses to Seeing Myself Again for the First Time