Hello all family and friends!

I am posting this from the Dubai airport (we made it!) but have been writing while settled into seat 44F next to the one and only Bryce Joshua Kreiser. Many of my peers are queuing up the movies they plan to watch, devouring a book, or chatting up a fellow zag or new seat mate. That is, except for Preston Matossian. From what I can see, this earnest friend of ours is finally catching his breath and a few laughs after his sprint from security to the ticket counter, back through security, and to Ethan waiting patiently for him at our gate to be some of the last to board the plane. Why? You might be asking. Well friends, let me tell ya. Preston was notified at the back end of security that the not one, not two, but THREE axes packed in his carry-on luggage would not be suitable to accompany him aboard our plane tonight. Fortunately, he had plenty of time to declare and check all three weapons and get into his seat before Daniel would have lost his seat mate and Ethan would have spent some quality time with Preston and the Flying Missions pilots.

Following the ax debacle, this second flight of the day has been notably more still than my first. Partially because we are in a Boeing commercial airliner instead of this morning’s six-seater bush plane, but mostly because plump and endless crocodile tears aren’t pouring down my face the way they did this morning. The first hour or so of this morning’s flight was spent clinging to my sweet seat (& suite!) mate Ellie as we both let ourselves cry. I’m talking ugly cry. I’m talking weep. Oh yes folks, I said it, weep.

As mentioned in the earlier blog authored by the aforementioned Presto, I had been feeling some type of sentimental way, and shared a song called Linger from my scouting childhood with the whole of our group and our guests at the Accompaniment Dinner on Saturday evening. This song is one that’s been stuck in my head and heart over the last few days as I kept wishing to linger a little longer in Zambezi. As Preston already relayed, the lyrics end with: “And as the years go by, I’ll think of you and sigh, this is goodnight and not goodbye.” Today on the flight out of Zambezi, I wished so badly for this to be the song that ran circles around my head. Instead it was my friend Jessie’s beautiful song she sang both at the Chileña farewell party and the Accompaniment Dinner. The sound of Jessie’s voice so powerfully echoed inside my head: “The time has come to say goodbye, the time has come to say goodbye. We hope to meet, rejoice again, hope to rejoice again.”

Each new day in Zambezi, I felt a string in my heart tie itself to any person, place, feeling, or event it felt called to knot itself up with. Some strings, like the one that will always tie me to Chingalala or the market, reflect the width and surprising strength of the twine we used to hang the art projects in the grade seven room. Some strings were as sturdy as the bungee cord I trusted with my life just a few short weeks ago. I think this strong bungee is the kind of string that will always tie my heart to Mama Katendi and to Chileña. Another heartstring resembles the knots tied around my ankle in the form of an anklet that matches the bracelet of one of my students who I grew particularly close to. This morning as we flew into the sunrise towards Lusaka, I felt the tension pulling on each of the strings in my heart now tied to hearts in a place that I am going so far from.

In my pocket is a bow made as a remembrance by the student whose wrist matches my ankle. Each time I run my finger over its cotton, I find myself turning over the question, what happens when goodbye comes? What happens when we can’t linger in a place anymore? How can you linger so many miles away from people who have tied their heartstrings to yours as you’ve tied yours to theirs? If you even should, how do you guard yourself from the pain of attachment or the fear of futility? When you so badly wish you could linger, for only a little longer, but you can’t, is it grief you feel?

I do know that accompaniment, friendship, companionship, and kinship -this partnership involves a certain empowering and life-giving mutual indebtedness to one another. That the closeness that has followed from seeing, knowing, and loving each new friend to the best of my ability given the time I have, no matter how much it might hurt when those heartstrings pull, gives way for the tightening of a bond, of a knot in the heartstrings of people connected over space and over time. I do know per the demonstration of the Deputy Headmaster at Chileña Secondary that just as you cannot separate Coke poured into Fanta, Gonzaga cannot be separated from Chileña. We ultimately are one. Our liberation, just as now our heartstrings, are bound together. 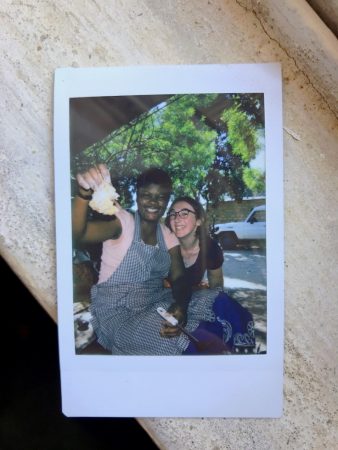